(Domperidone 10mg as immediate release and 20mg as Sustained Release)

Rabeprazole sodium belongs to the class of anti-secretory compounds, the substituted benzimidazoles, that do not exhibit anticholinergic or H2 histamine antagonist properties but suppress gastric acid secretion by the specific inhibition of the H+/K+-ATPase enzyme (the acid or proton pump). The effect is dose-related and leads to inhibition of both basal and stimulated acid secretion irrespective of the stimulus. Animal studies indicate that after administration, rabeprazole sodium rapidly disappears from both the plasma and gastric mucosa. As a weak base, rabeprazole is rapidly absorbed following all doses and is concentrated in the acid environment of the parietal cells. Rabeprazole is converted to the active sulphenamide form through protonation and it subsequently reacts with the available cysteines on the proton pump.

Domperidone is a dopamine antagonist with anti-emetic properties domperidone does not readily cross the blood-brain barrier. Its anti-emetic effect may be due to a combination of peripheral (gastrokinetic) effects and antagonism of dopamine receptors in the chemoreceptor trigger zone, which lies outside the blood-brain barrier in the area postrema. Studies in man have shown oral domperidone to increase lower esophaegeal pressure, improve antroduodenal motility and accelerate gastric emptying. There is no effect on gastric secretion 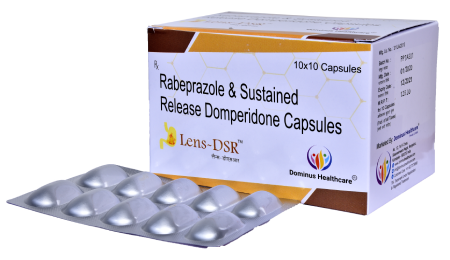