There is also an angiotensin type 2 (AT2) receptor found in many tissues, but AT2 is not known to be associated with cardiovascular homeostasis. Telmisartan has much greater affinity (>3000-fold) for the AT1 receptor than for the AT2 receptor.

Telmisartan does not inhibit the ACE (kininase II) nor does it bind to or block other hormone receptors or ion channels known to be important in cardiovascular regulation.

Blockade of the angiotensin II receptor inhibits the negative regulatory feedback of angiotensin II on renin secretion, but the resulting increased plasma renin activity (PRA) and angiotensin II circulating levels do not overcome the effect of telmisartan on blood pressure.

10 Tablets in a strip 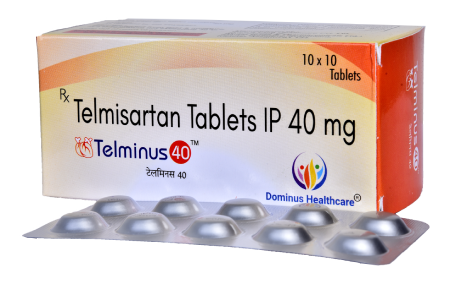