Telminus H is a combination of two drugs with antihypertensive properties: a thiazide diuretic, hydrochlorothiazide, and an angiotensin II receptor blocker (ARB), telmisartan.

There is also an angiotensin type 2 (AT2) receptor found in many tissues, but AT2 is not known to be associated with cardiovascular homeostasis. Telmisartan has much greater affinity (>3000-fold) for the AT1 receptor than for the AT2 receptor.

Telmisartan does not inhibit the ACE (kininase II) nor does it bind to or block other hormone receptors or ion channels known to be important in cardiovascular regulation.

Blockade of the angiotensin II receptor inhibits the negative regulatory feedback of angiotensin II on renin secretion, but the resulting increased plasma renin activity (PRA) and angiotensin II circulating levels do not overcome the effect of telmisartan on blood pressure.

Hydrochlorothiazide is a thiazide diuretic. Thiazides affect the renal tubular mechanisms of electrolyte reabsorption, directly increasing excretion of sodium salt and chloride in approximately equivalent amounts. Indirectly, the diuretic action of hydrochlorothiazide reduces plasma volume, with consequent increases in PRA, increases in aldosterone secretion, increases in urinary potassium loss, and decreases in serum potassium. The renin-aldosterone link is mediated by angiotensin II, so co-administration of an angiotensin II receptor antagonist tends to reverse the potassium loss associated with these diuretics. The mechanism of the antihypertensive effect of thiazides is not fully understood.

After oral administration of hydrochlorothiazide, diuresis begins within 2 hours, peaks in about 4 hours and lasts about 6 to 12 hours. 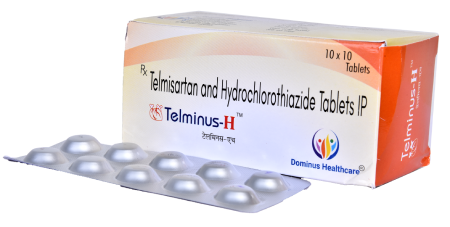