Teneligliptin is a DPP-4 inhibitor, which is believed to exert its actions in patients with type 2 diabetes by slowing the inactivation of incretin hormones. Concentrations of the active intact hormones are increased by teneligliptin, thereby increasing and prolonging the action of these hormones. Incretin hormones, including glucagon-like peptide-1 (GLP-1) and glucose-dependent insulinotropic polypeptide (GIP), are released by the intestine throughout the day, and levels are increased in response to a meal. These hormones are rapidly inactivated by the enzyme, DPP-4. The incretins are part of an endogenous system involved in the physiologic regulation of glucose homeostasis. When blood glucose concentrations are normal or elevated, GLP-1 and GIP increase insulin synthesis and release from pancreatic beta cells by intracellular signaling pathways involving cyclic AMP. GLP-1 also lowers glucagon secretion from pancreatic alpha
cells, leading to reduced hepatic glucose production. By increasing and prolonging active incretin levels, teneligliptin increases insulin release and decreases glucagon levels in the circulation in a glucose-dependent manner. 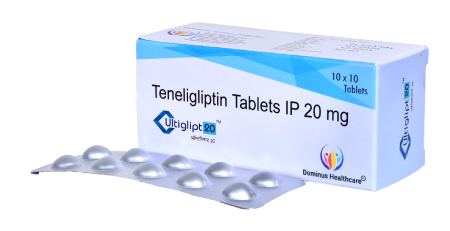