Rosuvastatin is a selective and competitive inhibitor of 3-hydroxy-3-methylglutaryl coenzyme A (HMG-CoA) reductase, the rate-limiting enzyme that converts HMG-CoA to mevalonate, a precursor of cholesterol. In vivo studies in animals and in vitro studies in cultured animal and human cells have shown rosuvastatin to have a high uptake into, and selectivity for, action in the liver, the target organ for cholesterol lowering. In in vivo and in vitro studies, rosuvastatin produces its lipid-modifying effects in two ways. First, it increases the number of hepatic low-density lipoprotein (LDL) receptors on the cell-surface to enhance uptake and catabolism of LDL. Second, rosuvastatin inhibits hepatic synthesis of very-low-density lipoprotein (VLDL), which reduces the total number of VLDL and LDL particles.

Aspirin is a more potent inhibitor of both prostaglandin synthesis and aggregation than other salicylic acid derivatives. The differences in activity between aspirin and salicylic acid are thought to be due to the acetyl group on the aspirin molecule. This acetyl group is responsible for the inactivation of cyclo-oxygenase via acetylation.

At higher doses, aspirin is an effective anti-inflammatory agent, partially due to inhibition of inflammatory mediators via cyclo-oxygenase inhibition in peripheral tissues. In vitro studies suggest that other mediators of inflammation may also be suppressed by aspirin administration, although the precise mechanism of action has not been elucidated. It is this non-specific suppression of cyclo-oxygenase activity in peripheral tissues following large doses that leads to its primary side effect of gastric irritation.

Clopidogrel is a thienopyridine class inhibitor of P2Y12 adenosine diphosphate (ADP) platelet receptors. It is an inhibitor of platelet activation and aggregation through the irreversible binding of its active metabolite to the P2Y12 class of ADP receptors on platelets.

Because the active metabolite is formed by CYP450 enzymes, some of which are polymorphic or subject to inhibition by other medicinal products, not all patients will have adequate platelet inhibition. 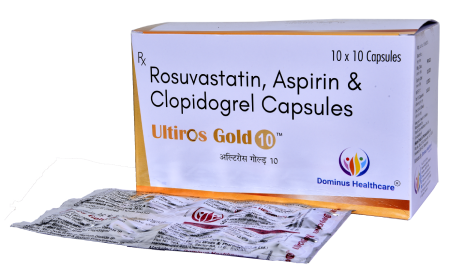